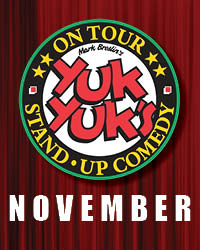 × Comedy Night in Camrose returns with an all new lineup of comedians.

Brittany Lyseng is a nationally touring stand-up comedian. She can be heard on CBC Radio’s Laugh Out Loud, SiriusXM and can be seen on Kevin Hart’s LOL Network. Brittany’s down-to-earth view of the world is capturing audiences across Canada, and has earned her a place at the Just For Laughs Festival in Montreal, JFL Northwest in Vancouver as well as multiple appearances at her home town YYCOMEDY festival in Calgary, Alberta.

Celebrating his 32nd year in the business, Mike Dambra has become a comedy staple across the United States and Canada. Known as the smart ass king of comedy, Mike comes armed with the ability to adapt to, and interact with any audience. Mike’s interactive style has earned him rave reviews in every venue and festival he’s played in and is known for having audience members come back more than once in a week because the show is always different. A native of Rochester, New York and now residing in Edmonton, Alberta, Mike has worked with acts from Mick Foley to Michael Bolton, Adam Sandler to Jim Brewer, Rosie O’Donnell to Paul Reiser. The Calgary Sun says, “Brush up on your sit-ups before you see this show, otherwise your stomach muscles will hurt the next day!”

In yet another case of professional drummer turned comedian, Matt Foster has thrown down his sticks to take up the call of the microphone, giving ‘drummer jokes’ a whole new meaning. With over fifteen years of performance experience, and performing for thousands of people every night on cruise ships, he is at home nowhere if not on stage. In a relatively short time Matt has established himself as a seriously funny comedian, performing on stages all around western Canada. A regular crowd favourite, his hilarious observations, clever writing, and anecdotes embarrassing enough to make a stone squirm are sure to have you rolling in the aisles.