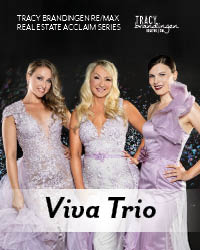 With multiple standing ovations every show, award-winning group ViVA Trio has toured Canada, the United States and Europe! This all-female vocal group is redefining their sound in a series of new releases. Siren Song, their first single in a wave of new music, features ViVA’s stunning vocals and symphonic base with electronic elements and effects. ViVA Trio loves fusion and sings everything from operatic classics to pop songs, like Sia’s Bird Set Free and Adele’s Hello. GoodLife Magazine said in a recent publication: “When ViVA Trio hits the stage live, it’s a show!”

With the release of their debut album: NOTHING ELSE MATTERS, recorded live with 52-piece orchestra, ViVA Trio has made International media. ViVA’s What a Wonderful World was featured in two commercials in South Korea, and their music video for their original song Here to Stay was aired on Strimeo TV, which was broadcasted in Poland, Ukraine and Russia; the world is watching ViVA Trio! The American Classical Crossover Magazine called their album “unique, compelling and refreshing,” while Eric Alper of Sirius XM’s Canada Talks called the album “thrilling, cinematic and intriguing.”

ViVA tours internationally regularly, highlights include their orchestra tour spanning Europe and North America, their NOTHING ELSE MATTERS Tour of the American West-Coast and their most recent Canadian National Tour in February 2020. ViVA Trio regularly performs for thousands at important festivals like Soul in the City, Symphony in the Gardens, and ITALFEST. Due to COVID-19, their European Tour 2020 and many other appearances have been postponed, however, during the pandemic, ViVA Trio launched ViVA gone Virtual, a series of concerts and live streams, and released “O Canada” with many top Canadian artists in support of the Unison Fund for Artists. The trio also filmed their live stream concert: LIGHT UP THE SEASON Holiday Special. In April 2021, ViVA Trio released their original song SIREN SONG featuring a brand new sound and visual direction. This is just a taster of the tidal wave of music ViVA will be releasing this year! Stay tuned for all new releases! ViVA Trio keeps pushing all the musical boundaries, and is coming to a theatre or screen near you!