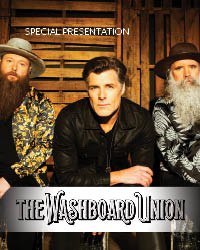 The impeccable three-part harmony and top-notch musicianship once again displayed by Aaron Grain, Chris Duncombe and David Roberts is only one aspect of The Washboard Union’s appeal. With about 30 songs in the running to make Everbound’s final cut, the group was determined to offer only their best material, aided by the keen ears of Nashville producers Gordie Sampson, Thomas “Tawgs” Salter and producer Karen Kosowski, who also co-wrote the album’s uplifting first single “Country Thunder.” Accompanied by a video starring puppet versions of Aaron, Chris and David, its quick rise up Billboard’s Canada Country chart made the song their highest charting single to date.

It’s all part of the unique relationship The Washboard Union shares with their audience that has evolved from playing the western Canadian bar circuit in the early 2010s to performing in front of over 200,000 people in North America and Europe last year alone. “We’re pretty positive people by nature,” Chris says. “We often hear that our music gives people hope, and that’s probably the thing that unites the songs on this album. There are rallying cries, but there’s also a lot of personal stuff too. If we’re able to put into words things that people sometimes aren’t able to say, then that’s a huge accomplishment.”