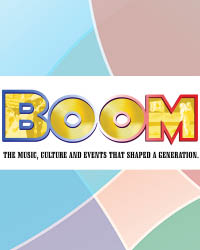 BOOM the Show An explosive one-man stage documentary chronicling the post-war Baby Boom years. Written, directed and performed by Rick Miller, BOOM is an explosive solo performance that documents the music, politics, and culture that shaped the Baby Boom generation (1945-1969). BOOM takes us through 25 turbulent years, and gives voice to over a 100 influential politicians, activists and musicians. It's a mind-blowing experience for audiences of all generations and, with over 400 performances already, a hit in Canada, the U.S., France, and Taiwan!

BOOM chronologically documents the period from the first atomic bomb in 1945 all the way to the Apollo 11 landing on the moon in 1969. These two iconic moments span one of the most tumultuous times in modern history, as a generation with incredible influence came of age alongside advances in technology and communication. Rick Miller performs all the characters and 25 moment-defining songs, in a stunningly staged production that blends cutting-edge multimedia, and tour-de-force storytelling. Experience the global events as they unfold: the Cold War, McCarthyism, Beatlemania, JFK, MLK, Vietnam... The various stories spiral into the “The Summer of Love’’, and BOOM ends as it began: with the birth of a new generation.