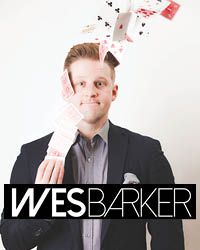 Wes's show features amazing magic tricks, crazy stunts, crowd interaction, and comedy from start to finish. Whether it is a live show in a theatre or a virtual show in your own home, Wes creates the best time and the most fun!

Wes has performed all over the world, both live and on TV. He has appeared on Penn & Teller: Fool Us, America's Got Talent, ELLEN, Wizard Wars, and MTV's Greatest Party Stories Ever to name a few.

Wes also has his own TV show! BIG TRICK ENERGY is available on Netflix (Canada), HBOmax (USA), and TruTV.