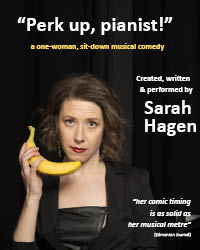 Often referred to as the next Victor Borge, Sarah has transformed her award-winning role as “concert pianist” into a stand-up, or rather, sit-down comedy. Pairing anecdotes with music, “Perk up, pianist!” takes audiences deep inside the world of a classical musician as she shares her earnest efforts to keep her spirits up in the midst of troublesome times. Described as “one of the best hours I’ve ever spent at the Fringe” [The Coast (Halifax)], “Perk up, pianist!” tells the tale of a touring classical musician remaining optimistic in the midst of challenging and ridiculous situations. Of the show’s debut at the Toronto Fringe Festival, Montreal Rampage wrote, “Hagen reminds us the beauty of how an honest solo performance can make you so easily fall in love with its performer.” Directed by Rick Roberts Created, written and performed by Sarah Hagen, with original compositions

“Her comic timing is as solid as her musical meter. ” — The Edmonton Journal