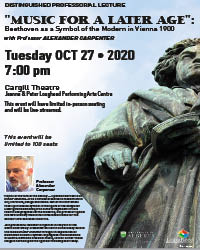 × Music for a Later Age": Beethoven as a Symbol of the Modern in Vienna 1900

Vienna at the turn of the century—a period referred to as Wiener Moderne—was a hotbed of aesthetic modernism in art, literature, design and music. Out of this movement rose a paradoxical symbol in the figure of the composer Ludwig van Beethoven, who came to represent artistic rebirth and progress for the moderns but protector against the revolutionary music that threatened Vienna for the conservative audience and critic. Join professor Alexander Carpenter in the year of the 250th anniversary of Beethoven’s birth as he takes you into the radical Wiener Moderne through an exploration of Beethoven as both a symbol of progress and touchstone of Austro-Germanic classical music, as well as how these insights have shaped the figure of the composer today.