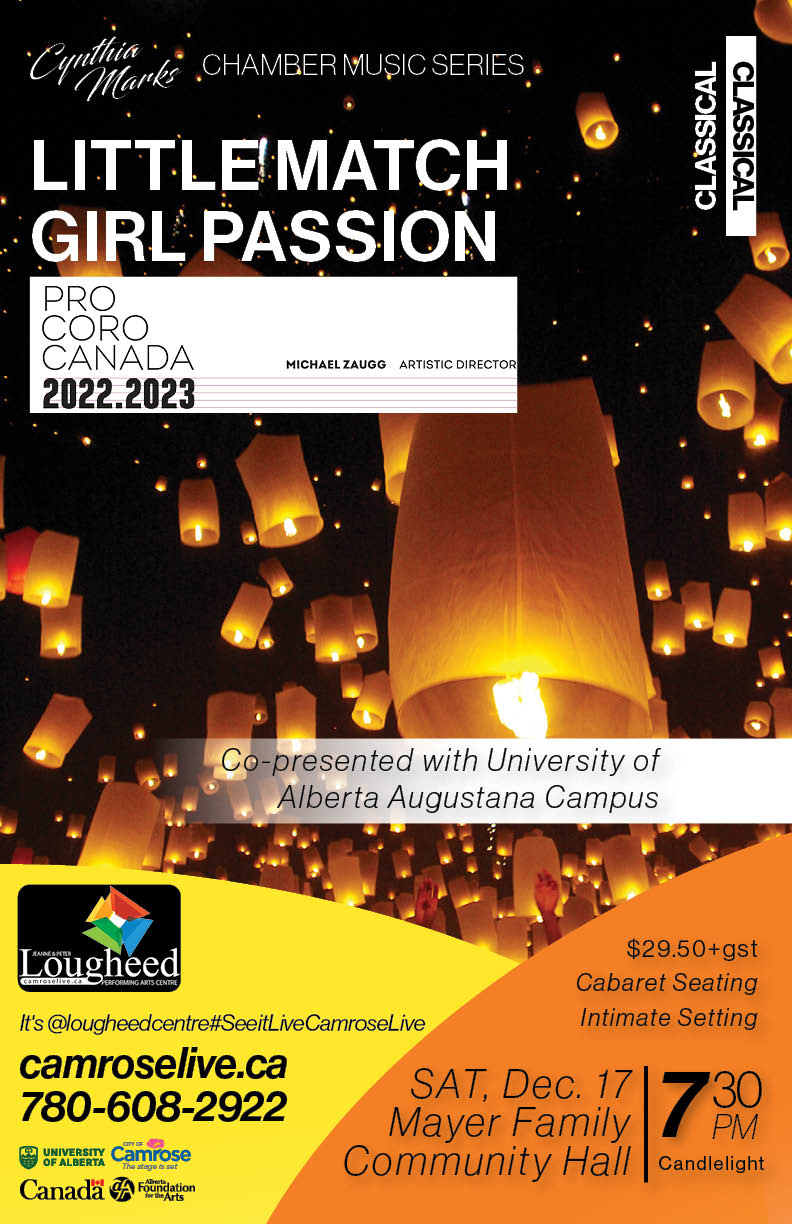 From David Lang about Little Match Girl Passion by Pro Coro Canada: I wanted to tell a story. A particular story — in fact, the story of The Little Match Girl by the Danish author Hans Christian Andersen. The original is ostensibly for children, and it has that shocking combination of danger and morality that many famous children’s stories do. A poor young girl, whose father beats her, tries unsuccessfully to sell matches on the street, is ignored, and freezes to death. Through it all she somehow retains her Christian purity of spirit, but it is not a pretty story. What drew me to The Little Match Girl is that the strength of the story lies not in its plot but in the fact that all its parts—the horror and the beauty—are constantly suffused with their opposites. The girl’s bitter present is locked together with the sweetness of her past memories; her poverty is always suffused with her hopefulness. There is a kind of naive equilibrium between suffering and hope. There are many ways to tell this story. One could convincingly tell it as a story about faith or as an allegory about poverty. What has always interested me, however, is that Andersen tells this story as a kind of parable, drawing a religious and moral equivalency between the suffering of the poor girl and the suffering of Jesus. The girl suffers, is scorned by the crowd, dies, and is transfigured. I started wondering what secrets could be unlocked from this story if one took its Christian nature to its conclusion and unfolded it, as Christian composers have traditionally done in musical settings of the Passion of Jesus. The most interesting thing about how the Passion story is told is that it can include texts other than the story itself. These texts are the reactions of the crowd, penitential thoughts, statements of general sorrow, shock, or remorse. These are devotional guideposts, the markers for our own responses to the story, and they have the effect of making the audience more than spectators to the sorrowful events onstage. These responses can have a huge range—in Bach’s ”Saint Matthew Passion,” these extra texts range from famous chorales that his congregation was expected to sing along with to completely invented characters, such as the ”Daughter of Zion” and the ”Chorus of Believers.” The Passion format—the telling of a story while simultaneously commenting upon it—has the effect of placing us in the middle of the action, and it gives the narrative a powerful inevitability. My piece is called The Little Match Girl Passion and it sets Hans Christian Andersen’s story The Little Match Girl in the format of Bach’s Saint Matthew Passion, interspersing Andersen’s narrative with my versions of the crowd and character responses from Bach’s Passion. The text is by me, after texts by Han Christian Andersen, H. P. Paulli (the first translator of the story into English, in 1872), Picander (the nom de plume of Christian Friedrich Henrici, the librettist of Bach’s Saint Matthew Passion), and the Gospel according to Saint Matthew. The word ”passion” comes from the Latin word for suffering. There is no Bach in my piece and there is no Jesus—rather the suffering of the Little Match Girl has been substituted for Jesus’s, elevating (I hope) her sorrow to a higher plane.